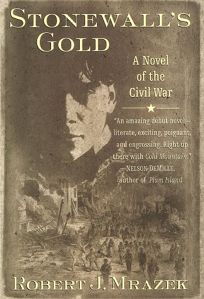 “This first novel by ex-Congressman Mrazek is a deft and fast-paced historical adventure… A gripping, well-researched, and vivid debut.” —Kirkus Reviews

“A priceless novel…Mrazek joins a handful of writers who have mined the vast field of the Civil War to produce a must-read book.” --The Washington Times 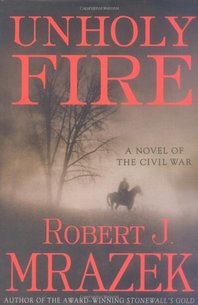 “Among Civil War novels, this second effort by former U.S. Congressman Mrazek (after his prize-winning Stonewall's Gold) is a rare find: a book that successfully combines mystery, historical drama and impressive wartime verisimilitude… Mrazek's portrayal of Civil War battle is stark, graphic, bloody and exciting, and is only exceeded by his memorable description of Washington, D.C., as a Gomorrah on the Potomac.”--Publishers Weekly

“A compelling look at the debilitating physical and psychological realities of war and a brilliant portrait of a time in our history by a former congressman... Mrazek—a former Democratic representative from New York who won the Michael Shaara Award for his previous Civil War novel—masterfully weaves fact and fiction…poignant and well-drawn.” --Washingtonian

“Although I picked up this novel skeptically, I had a hard time trying to put it down. The author, Robert Mrazek, who was a Democratic member of the U.S. House of Representatives from 1983 to 1993, has a genuine storytelling gift…Mr. Mrazek keeps his plot complications in balance and spinning toward a spectacular final chase and conclusion… If the author is to explore his talent at writing in this vein, it will make him either abandon the thriller genre or enrich it in some unusual way… The second evocative and deeply touching passage is a postscript set in 1920…The postscript is filled with genuine, not conventional, ache of the soul... It was fun getting to the end, but the end itself provides something better.” --The Washington Times 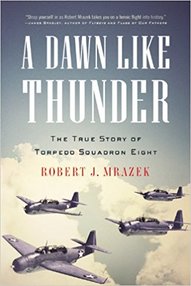 "A Dawn Like Thunder, by journalist-turned-congressman-turned-novelist Robert J. Mrazek, melds a good story with solid and skeptical research. Mrazek's multiple roles over the years-- are perhaps why the book moves so well… Academically trained historians too often reduce gripping events to soul-parching compilations of cautious statements that only the most generous might grace with the term ‘narrative.’ On the flip side, journalists attempting to write works of history sometimes jettison their skepticism; the result is often a great story but not very good history. In his first foray into history, Mrazek captures the best of both approaches, avoiding hagiography and telling the story of Torpedo Eight and the war in the Pacific as it was, not as some might wish it had been… Mrazek injects that most elusive element, complexity… With A Dawn Like Thunder he earns the title of historian, one that this reviewer does not apply lightly. I look forward to his next work of nonfiction. If you need me, I'll be in the bookstore, looking up his previously published novels.”--The Washington Post

“Mrazek brilliantly captures the bravery of Squadron Eight in World War II's pivotal battle of Midway… Mrazek's gripping account of the group's bombing activities is rich in detail and tactical analysis. A well-written and meticulously researched account of one of America's most distinguished World War II aerial groups.”--Library Journal

“Robert Mrazek has with a raw, unsparing telling, given grace and life to so many who died so young, so every day, so gallantly. Wonderfully uplifting.” --Frank Deford

“A soaring epic prose ballad about a group of young Americans whose rendezvous with destiny blazed a trail their whole generation would follow…an enduring tale of human tragedy and triumph that will speak down to the latest generation.”  --Richard Frank

“A stirring, truly heroic book that is destined to become a classic.”  --Alex Kershaw 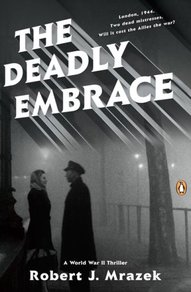 ​THE DEADLY EMBRACE (fiction)
Winner of the *2007 W.Y. Boyd Literary Award for Excellence in Military Fiction from the American Library Association

“An intricate and stunning plot.  Mrazek lends true emotion and depth to this remarkable story of intrigue and suspense.
--Nelson DeMille

"A fast-paced thriller laced with violence and filled with unexpected twists that keep the reader guessing to the last page."
-- Rennie Airth, author of The Blood-Dimmed Tide 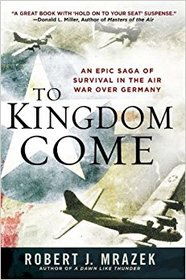 "With power and passion, Robert J. Mrazek tells the story of one of the most calamitous American bombing missions of World War II....Mrazek writes about the ill-fated Stuttgart Raid as though he had gone into the heart of the Reich with the audacious American bomber crews...a great book with 'hold on to your seat' suspense."   --Donald L. Miller, author of Masters of the Air: America's Bomber Boys Who Fought the Air War Against Nazi Germany

"Mrazek has uncovered the moment of profound exigency for the bomber crews, when the course and consequence of the air war converged and rendered it in vivid clarity." -Hugh Ambrose, New York Times bestselling author of The Pacific

"[A] work of cinematic sweep and pace." --Richard Frank, author of Downfall and Guadalcanal

“A taut, original thriller… I couldn’t put it down.” –Ryan Lockwood, Author of Below
​
“This book offers so much excitement and adventure it makes one not ever want to finish reading it.”
--Amazon.

"A gem of a tale, taut with tension and so wonderfully crafted that it's difficult to put down."―Rick Mofina, international bestselling author of Last Seen

“Vivid and visceral…engages from page one…A genuine page-turner that's not only smart but truly packs a punch."―Douglas Corleone, author of Robert Ludlum's The Janson Equation